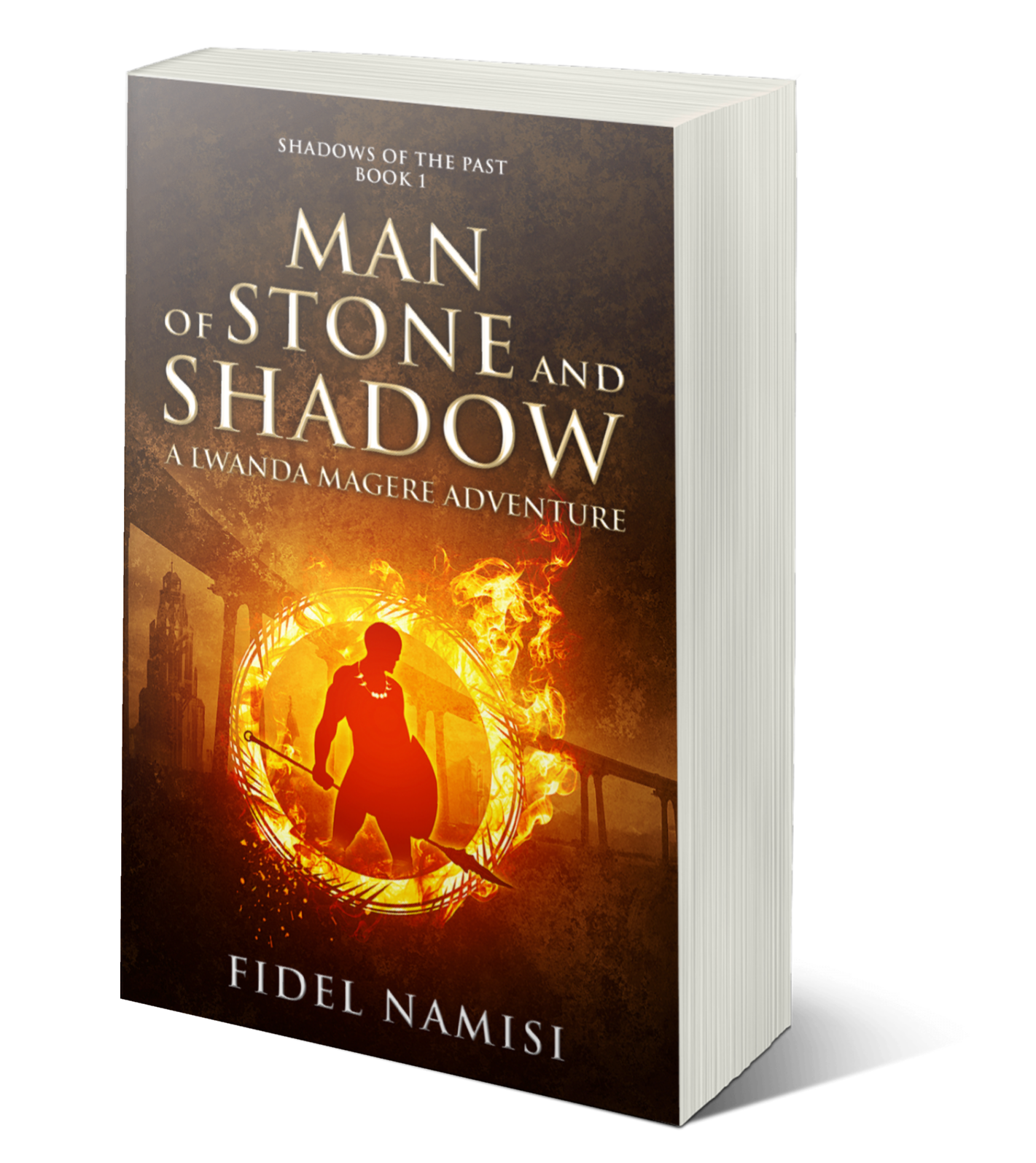 What I enjoyed about writing this scene was watching the hero, Luyanda, take a back seat and have to rely on someone else to do a little bit of the super-heroing.

After the cab had receded into the distance, the silence and darkness that seeped out of Uru’s estate engulfed everything around them in an unsettling gloom. The wind rustled through the leaves of the trees overhead, and in the distance, they could make out the faint tinkling of the fountain playing in the garden. “Seems like nobody’s home,” Luyanda said. “Will you allow me to take a look?” Nomsa nodded. Luyanda melted into the shadow of the wall looming over them. From there he glided along the shadows of the trees, making his way towards the shade cast by one of the outer walls of the house. As he slipped into it, he smashed headlong into a solid barrier. He stumbled out of the shadow, taking on his full form and grabbing his stubbed nose, eyes watering. He had no idea what had just happened. He stepped back into a shadow in the gardens, slipped around to another side, and tried to seep into another one of the house’s shadows. Again, he slammed hard into a wall that he could not see. A few more tries met with the same result. He retraced his steps, and startled Nomsa as he stepped out of the silhouette of the tree beside her. “You need to stop doing that!” Nomsa gasped, pressing her arms to her chest as she attempted to catch her breath. “You’ll give someone a heart attack one day.” “I couldn’t get into the house.” “What happened?” “I think Uru’s found a way to block me.” Nomsa creased her brow. “That’s not good. I don’t know how else we can get in there. I can’t climb up that.” She peered up at the massive wall looming before them. “You could blast it,” Luyanda suggested. “Uh-uh,” Nomsa shook her head. “I’m nowhere near strong enough.” “There’s only one way to find out.” Nomsa scratched her head, and peered at the wall dubiously. “You do realize that I’ve only once done — that thing, right? I don’t even know if I could do it again.” “What choice do we have?” Luyanda threw up his hands, exasperated. “Our friend could be in there. He could need our help. And you’re afraid to try?” Nomsa was quiet for a moment. “Okay,” she said. “Stand back.” Luyanda stepped back, whilst Nomsa shut her eyes and pressed the palms of her hands together. The stirring in the leaves overhead grew louder as a wind whipped up about them. He glanced at Nomsa. She leaned forward, palms pressed firmly together, and inhaled deeply. A speck of water landed on Luyanda’s cheek. He looked up into the sky. A dark cloud wheeled over their heads. He shot a worried glance at Nomsa. She kept her eyes shut, and was rocking back and forth on her heels now. The wind grew louder. “Nomsa,” Luyanda shouted. “I think you need to stop —.” A flash of brilliant light tore through the sky with a deafening crash. Luyanda was thrown onto his back as he felt the ground shudder beneath him. He staggered to his feet, rubbing his backside and dusting off his clothes. Nomsa was on her knees, panting for breath. He turned to the wall and gasped. A pile of scorched bricks lay where the wall had been a few seconds earlier. “Wow!” Luyanda gushed. “Nomsa, that was terrific.” Nomsa didn’t say anything. Luyanda helped her to her feet. “Are you okay?” he asked. “I just need to catch my breath,” she said. “But let’s go. I’ll be fine.” They picked their way over the debris and into the garden. The lightning bolt had carved a track across the garden and right up to the mansion’s door. They followed the pale footpath and made their way to the mansion’s entrance. The majestic door lay off it’s hinges, blackened and burned. “Oops,” Nomsa whispered. “I didn’t mean to destroy it.” “You saved us time. Come on.”

When I wrote this chapter, I honestly didn’t expect Dr. Bimba to behave as she did. I thought she’d just give the two students a hard time, then eventually cave in to their pleading. But I discov...

He waited. He could hear the laboured breathing, punctuated by the occasional deep sigh, coming from the other side of the door. Not long now, he thought to himself. Not long before his father ...

Can The Arts Be Taught In An Academic Setting?